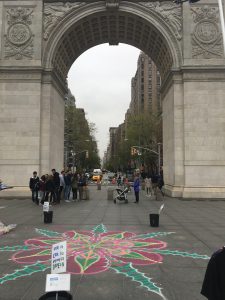 Up Fifth Avenue from the Washington Square Park Arch

How have your last hundred days been? No doubt you’ve been engaged in peaceful reflection if not bored out of your mind from the lack of controversy, acrimony, and world turmoil.

Well just in case you’re looking for a story about little guys giving creeps their due, The Sultanette has a film for you.

Citizen Jane: Battle for the City is the story of a woman’s fight for urban preservation but its most stunning scene celebrates destruction. Spoiler: The bad guys get obliterated.

The slow motion collapse of failed housing projects reflects the filmic elegance of director Matt Tyrnauer (Valentino: The Last Emperor). But in this latest documentary, to watch these massive structures crumple in nuclear clouds of dust and grime is to celebrate the fall of the Titans. Goliath unhinged. Money, arrogance, power … poof!

After reading Joe Morgenstern’s Wall Street Journal review last Friday, “In ‘Jane,’ a Real Urban Legend Comes to Life” I escaped to the IFC (International Film Center) to catch it on opening day. Nothing like taking in a Greenwich Village flick in the middle of a Friday afternoon to staunch the internal bleeding of a week spent manacled to the computer.

For Jane Jacobs, the city was a living breathing organism and its streets were the veins where people gathered, gossiped, watched, kissed, cried, sighed, prevailed. Morgenstern describes her as “the apostle of street life” whose work “remains a guiding light for city planners.”

In the film’s riveting narrative she confronts her dark arch rival, the “master builder, redeveloper and implacable scourge of New York neighborhoods” Robert Moses and his “wrecking-ball alliance.” 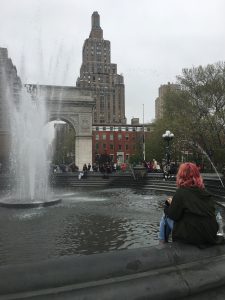 Around the fountain at Washington Square Park

The freelance journalist, wife and mother, with no college degree or training in urban planning should have been a pushover for Yalie Moses and his power elites. Jacobs liked to pen polite articles for the Sunday Herald, Vogue and Architectural Forum, and hang out in her Greenwich Village neighborhood. But when Moses proposed to cut Fifth Avenue through Washington Square Park, an iconic Village gathering place, it was her tipping point.

Though his brutal re-shaping of the fabric and geography of the city is legendary, Moses did not succeed in that project thanks to the opposition lead by Jacobs. The Greenwich Village housewife, as portrayed by the press, was also arrested for standing up to Moses’s Lower Manhattan Expressway proposal which also failed.

Morgenstern suggests that after this victory, the film’s climax is reached and the narrative flags – shifting its focus from Jacobs to America’s urban renewal disasters that conclude with the montage of public housing projects brought down by dynamite. 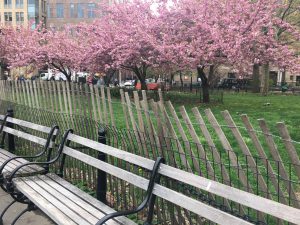 Springtime in the City at Washington Square Park

But to watch the fall of these monuments to arrogance – such failures that the only solution was demolition – is to understand that abstract models on a table aren’t always a solution for problems on the street. After hearing the cocky rhetoric of Moses and his urban henchmen, the sight of these buildings going down is proof in plain sight that occasionally the certainty of power can be just plain wrong.

The movie concludes that it was skepticism not certainty that served Jane Jacobs. Where she saw urban life as an “organized complexity” Moses looked on it as numbers on a balance sheet. “Just give them cash,” he responds when asked how he plans to gut a neighborhood to build an expressway, “They don’t own anything, so they’ll take it.” Today, her treatise, The Death and Life of Great American Cities, published in 1961, is considered a bible in the field of urban planning. 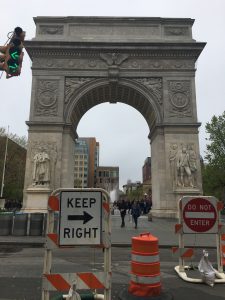 Reserved for People. No cars allowed.

When I walked out of the IFC, the Village was revving up for the weekend. Freshly released from offices and classrooms, the citizens of New York were filling up bars, bodegas, and smoke shops. Why not swing by Washington Square Park a few blocks away?

As I approached the square, I heard strains of live jazz. Students clustered on benches and around the edge of the fountain. A couple of guys huddled over a chess board while a third refereed. A row of trees burst pink blossoms along a makeshift fence. A trio of Japanese guys played Mac the Knife and a young mom balanced her teetering baby as it bounced to the music. No cell phone rants. Just jazz, laughter, and conversation. Somewhere somebody clapped.

Was it for Jane Jacobs? Without her, this turf would be ruled by traffic lights.