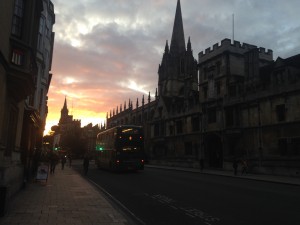 It’s rumored that the sun rose in Oxford at 8:08 this morning and will set this afternoon at 3:56. Did I say sun? It might make an appearance before these scant eight hours of drizzly day surrender to a dark and stormy night but don’t bet your Wellies on it.

But as my faithful followers know, it takes more than fifty shades of grey to dampen The Sultanette’s holiday spirit, especially when there are spirits to be had. So I now offer you a guide to intoxicating Oxford, guaranteed to satisfy body, soul and brain. Just don’t sleep in or you’ll miss tomorrow. 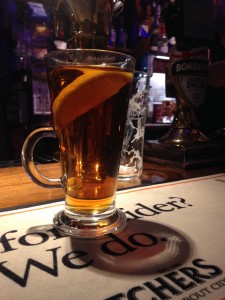 To begin with imbibing, the house mulled wine is a December specialty at the Quod Brasserie on High Street, favored by the local professional crowd. And sherry is gratis with mini-mincemeat pies on shopping night at Blackwell’s Bookshop, the best literary hangout on Broad Street.

But the King’s Arms with its Pimm’s Winter Warmer, a brandy-based elixir that tastes like a baked apple, is the most brilliant. In business since 1607, Oxford’s oldest pub is also said to be the brainiest, with the highest IQ of patrons per square foot. 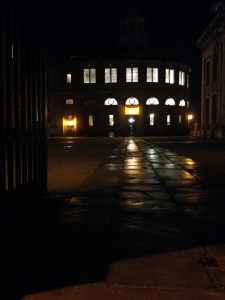 I stopped at the King’s Arms to sample the anti-freeze last Saturday on my way to Handel’s Messiah at the Sheldonian Theatre. By the third sip I was ready to strip down if I didn’t think it would shock the kindly gentleman who was instructing me in the art of sneaking into Blenheim Palace to avoid the admission fee. (A side entrance near the pub.)

Though you can forget everything you’ve heard about the snooty, undemonstrative, insufferably polite English. Toss any stranger a well-timed quip and they’ll lob it back with cracking impropriety. And if you’re looking to escape from corny carolers and chintzy holiday sentiment, Oxford is your town. 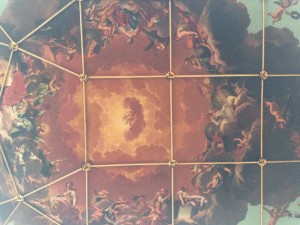 Just up the road from the Sheldonian where the angelic voices of the Magdalen Boys Choir lifted Handel’s Messiah to the heavens last Saturday, you can fall into the Albion Beatnik Bookstore on Walton Street where they haven’t gotten around to removing the paper hearts and Jack O’ Lanterns from Valentine’s Day and Halloween to make room for partridges in pear trees. 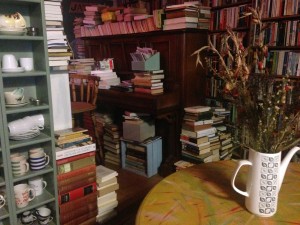 I arrived there on a stormy Monday night for an open mic poetry reading, in the good company of Lord of the Flat (the first and only Right Honorable Male Harem Member after granting me full squatting rights in his palatial pied a terre these three months).

The main event was a reading from Dan Sluman’s collection, the terrible (poets don’t have to bother with upper case). But it was Dan Holloway who stole the show with his stingingly droll eulogy, “Dead Poet’s Are Safe.” 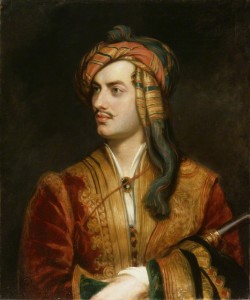 Something happens to words uttered in Oxford, sung or spoken, and to experience Holloway perform adds an essential mellifluous malicious charm to his dissident verse. “O Byron was mad!” he laments, “O Byron was bad! But he won’t come round with nipple clamps and slip poppers to your dad!”

Under the influence of Albion owner Dennis’s homemade brew of yes, mulled wine, it was the perfect sendoff to the forthcoming Sultanette’s Christmas in Wales. Surely, dead Welsh poet Dylan Thomas would have agreed. He died gave up the ghost after a few whiskies on November 9, 1953, while on a poetry-reading tour in New York City, no doubt to avoid another British winter. 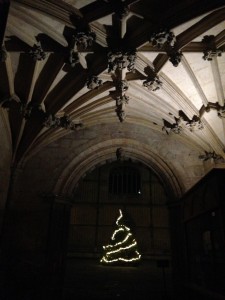 And yes! The last phase of The Sultanette’s retreat will be spent in a fifteenth century Wales’ manor with entitled chickens, unruly grandchildren, dotty in-laws, and the assurance of ample grousing from stuffed goose to plum pudding. I’m promised a shelf to sleep in similar to Harry Potter’s cupboard. And on Boxing Day I’ll celebrate Christianity’s first martyr St. Stephen, who got stoned hundreds of years ago.

But we’re not done with Oxford yet! Before I return to New York City for New Year’s Eve, I leave you with a bonus virtual tour you won’t find in the brochures at the visitor’s center: 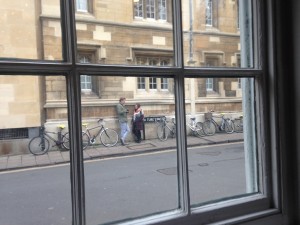 There are soulful soups and thick slices of homemade bread at the Turl Street Kitchen and lamb stew served with persistent cheer at the Vaults Café and Garden. The ever-so-gently-used satin sleepwear at the Helen & Douglas House thrift shop is ten minutes away in Summertown, where you can lunch at Joe’s Bar & Grill with vintage photos of rock legends.

If you’re looking for smart sanctity, Oxford’s 700-year-old University Church of St. Mary the Virgin has evening seminars with subjects that ranged this term from a Middle Ages mystic “feminist” to the art of the obituary. And guess what! They serve sherry after Sunday morning service. 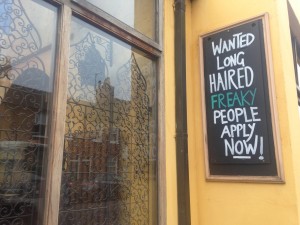 Want a gig at the Kazbar?

Across the Magdelan Bridge on Cowley Road, the WIFI-friendly Beetroot café welcomes couch potatoes (and the beets are good, too). The tapas at the Kazbar are perfectly paired with the “long-haired freaky people” behind the bar. Co-operative Food is open until midnight for crisps, crumpets, and Fairtrade wine, and the genial Rasta security guard will help you find it.

The best view of Oxford is worth risking life and limb on the muddy root-gnarled paths at South Park. And after a bare two-hour trip from London by bus or train, if you’re not ready to return to Gomorrah, check in at the Old Parsonage where the fire’s been crackling since the seventeenth century. 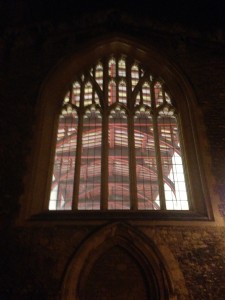 Oxford from the outside in

But how do you leave a place that was a stopover and became a way of life? I came to Oxford to find new inspiration at a university that’s older than the Aztecs. I filled up composition books with notes on philosophy and poetry, Elizabethan England, Byzantium, Jacobin France, and Nazi Germany.

I sat in lecture halls with arched, etched ceilings, wood-carved walls and stained-glass windows. In spare classrooms and college commons with dowdy profs, hard-core academics, and kids who looked like they could be students anywhere except they weren’t. I studied, read, wrote and vegged, made love, brewed tea, swept leaves, and listened to the BBC. 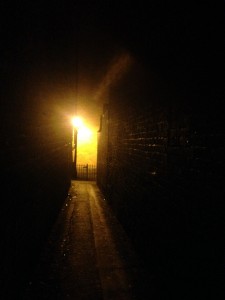 What I learned while I was taking it all in was how to take my hands off the steering wheel. To stop pressing Reply, Retweet, React. To unclench expectations, detonate the agenda, and unplug from urgency long enough to be lead to the next idea. And as each day gets shorter, I get better at feeling my way in the dark to a place I may not recognize when I get there. Even if it’s home.

No doubt, I’ll succumb to the exquisite angst of New York City. I’ll rush to reunite with friends, schedule the trainer, and survive again on six-hours of sleep. But it’s too late to leave the dreaming spires behind as I head back to the clamorous 21st century.

A merry UnChristmas to all. And to all a dark and stormy night.