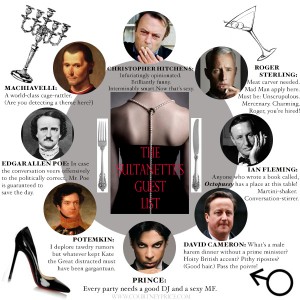 Verboten in The Male Harem is the query, “Where have you been?” It smacks of time squandered obsessing over another’s absence that might be better spent doing twenty pushups or slowly sipping a very dry martini.

That said, if you still dare to ask where I’ve been, you obviously haven’t visited CourtneyPrice.com where The Sultanette, along with unveiling juicy tidbits on male maintenance (Inspired by The Sultanette), threw a fantasy dinner featuring infamous rogues alive and dead, as depicted here by the artful Ms. Price.

Frivolous socializing, you say? Think it’s easy to make small talk with Machiavelli or out-snark Roger Sterling? Then there’s The Male Harem risk factor of committing to the companionship of exquisite transients. In that sense, a romantic dinner is not unlike a love affair – or a marriage for that matter. When the stimulating conversation peters out and the clothes that were tossed off in the heat of passion are untangled, we retreat to our separate worlds. 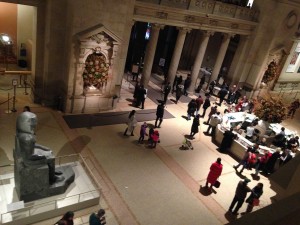 Living solo in the company of The Male Harem continues to nourish. But like any behavior not endorsed by the cabal it requires the occasional psychological selfie: How ‘my doing? Does this float? Is it still safe out here? Has the park closed? So when I learned of the exhibit on the portraits of Madame Cézanne, a lifelong intimate outsider in the artist’s world, I hightailed it to The Metropolitan Museum of Art. 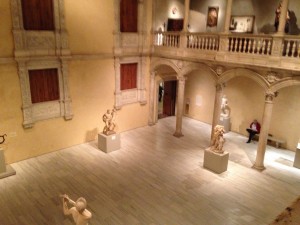 On a Saturday night, naturally. The Met is open until 9pm on weekends allowing visitors to actually see what’s on the walls and feel its vastness. Where else in New York City on a Saturday night could you escape cell phones and long lines and see and be seen by no one? After years of this practice, I’m amazed at what a City insider’s treat it remains. I always love spotting the tweeded-out Upper Eastside septuagenarian couple on their Met date, help off for the night. 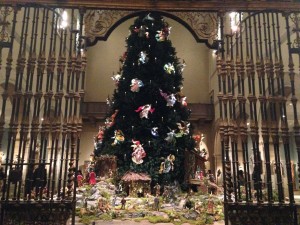 Admittedly on this Thanksgiving Saturday there were holiday ogglers at the tree to negotiate. But devoid of schmaltzy canned Christmas tunes the spirit of the season prevailed at the nativity. And speaking of women living outside the line, if the Blessed Virgin couldn’t find more acceptable amenities than a lean-to with manger plus shepherds and three dusty kings for paparazzi, Mother of God! 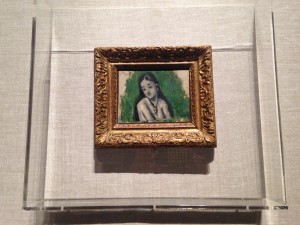 Which brings us back to the portraits of Hortense Fiquet, aka Madame Cézanne. The first was painted two years after they met in 1869 when she was nineteen and he was thirty. There is a nubile innocence in this “Young Woman with Loosened Hair” that never reappears.

Between that portrait and the solid gaze in “Portrait of Madame Cézanne in the Conservatory” painted twenty years later she has been his most painted subject. She has also birthed his child, there have been acrimonious separations, a secret marriage, and upon learning of the liaison, Cézanne’s banker father has threatened to disinherit.

The exhibition neatly sums up this “lifelong attachment” in a single sentence, describing the woman who “profoundly influenced [Cézanne’s] portrait practice for more than two decades” as being “not well received by either his family or his friends.” Yet over those twenty years she sat before him, still for hours, letting him pour over her every angle and inflection. Watched. Composed. Made art of. 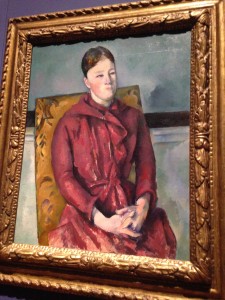 Referring to his red dress paintings from the 1880’s, the show quotes Cézanne, “Only I know how to paint a red.” But Hortense is no Madame X. She neither flirts nor defers to the man who commands her presence. For all the silent and not so silent indignities she must have absorbed, she appears neither broken, self-righteous, nor embittered. Unscathed by the rancor of petty minds she sits, hands folded, eyes fixed on a distant place. 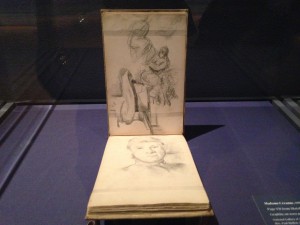 What anchored her? Was it knowing that unlike the domineering father and dismissive friends, she had a piece of the artist no one else could touch? That only she had felt those silent hours of undivided attention when Cézanne reached for his deepest passion? With all our clamor for lasting connections, it was enough to immortalize.

Madame Cézanne can be seen at the Robert Lehman Collection, first floor of the Metropolitan Museum of Art through March 15, 2015.

CULTURE SNATCH is a series on The Sultanette’s ramble among the arts. Watch for BETWEEN THE COVERS book reviews and DICK OF THE WEEK commentaries on notable or notorious males in the news.