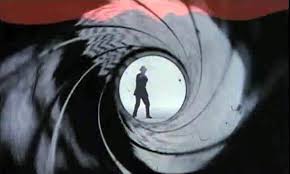 The Vortex. In or Out?

Reality or illusion? Good or evil? Choose. Or better yet, don’t. Since The Male Harem is all about the illusion of certainty and the reality of ambiguity, you’ll be in good company.

And who better to launch The Sultanette’s DICK OF THE WEEK series than a conjurer of that space between our better selves and the fascinating underbelly than production design auteur, Sir Ken Adam. (He’s a knight besides!) 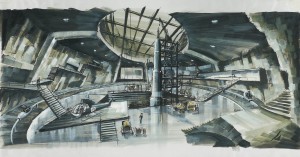 If you weren’t too distracted by movie date booty, you’ve been aware of Sir Ken’s sleight of hand setting the stage for the clash of intrepid hero and unscrupulous villain in James Bond flicks from Dr. No to Moonraker. Before the age of computer-generated images, the worlds he concocted neatly captured the tension between reality and fantasy, like the million dollar fiberglass volcano that swallowed up helicopters and space rockets, built on a backlot for You Only Live Twice.

How can you not adore a man who bemoans the passing of the good old days when a villain was an unadulterated cad? “I think in the last Bond film I saw … they lost the importance of the villain,” Adam told The Guardian in 2002. “To me, designing the villains’ bases was a combination of tongue-in-cheek and showing the power of these megalomaniacs. I think the villain is just as important as Bond. Someone who simply wants to destroy an oil pipeline to me is just not sufficiently important as a villain.” 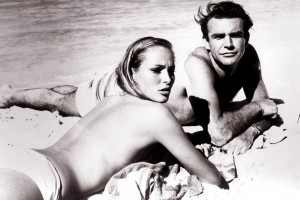 Adam’s brilliance occurred behind the scenes but Male Harem experience suggests that might be the most intriguing place to enjoy it. And now you can view the method to Sir Ken’s mad designs from his 40-foot high bullion-lined Fort Knox (Goldfinger) to the uber-creepy war room in Stanley Kubrick’s Dr. Strangelove through his drawings, photographs and films in the exhibition “Bigger Than Life” at Berlin’s Deutsche Kinemathek until 17 May. 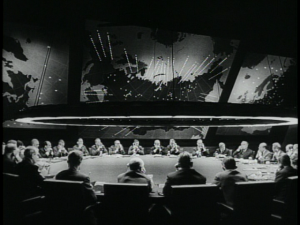 Ever had the urge to push EJECT on your boss at the annual review? Revisit Adam’s user-friendly conference room in Thunderball. “I had these chairs with individual control consoles facing each other … then I had the idea of one of the chairs disappearing under the floor with a man who had betrayed Spectre and coming up empty.” (Hasta la vista, baby!)

Or how about suggesting an off-site meeting, say, in the Tarantula Room of Dr. No, a set thrown together as an afterthought according to Adam. “There was nothing in it except a chair, the door, and in the foreground a table with a tarantula cage. And so you got this surrealistic, very simple set with an incredible effect.”

Can you make this stuff up? “The Bond scenes which Sir Ken designed betray an insight into (his) personal struggle … between good and evil, albeit in the make-believe world of James Bond,” says Helen Fry, author of Churchill’s Secret Soldiers. 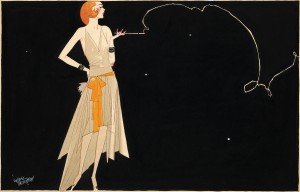 Adam grew up in the Berlin of the “golden twenties” in an upper-middle-class Jewish family who owned a high-fashion clothing store and summered on the Baltic. After the Nazi Party came to power in 1933, the shop was forced into bankruptcy and his father, a former officer in the Prussian cavalry, was arrested.

A shop-employee who had become a leader in the SS arranged for his release and the family left for England in 1934. “My father went out with a little suitcase to sell gloves,” he tells Steven Karras at web2carz. “It really destroyed him, there was no question about that.” He died in 1936. 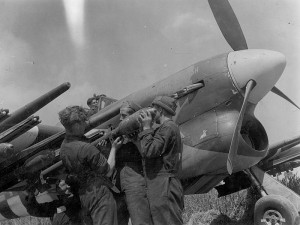 Adam’s architectural training got him an apprenticeship at a firm designing bomb shelters and he enlisted in the Pioneer Corps, a unit for trusted German nationals, before transferring into the Royal Air Force as one of three German-nationality fighter pilots in the RAF during WWII. He flew the powerful Hawker Typhoon armed with rockets and cannons to support the advancing British army. After attacking the Falaise Gap in Normandy he visited the battlefield with his commanding officer, a scene of death and stench he tells Karras that was “a shock to the system” he never forgot.

After the war, a draughtsman position at a film studio lead to work on movies like Ben Hur, Around the World in 80 Days, and the first Bond film, Dr. No. “But nothing could have prepared him,” Karras writes, “for the tornado that was Stanley Kubrick.” 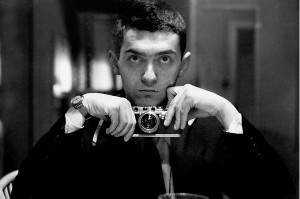 “I used to drive him to Shepperton Studio in my E-Type Jaguar and he didn’t allow me to drive faster than 30mph,” Adam tells Karras. “And while it was a close relationship, at the same time I felt that it was fatal for me to be that close to someone like Kubrick … He was the most possessive director I’d ever worked with and at the time I swore [Dr. Strangelove] was the last picture I’d work with him.”

Adam won his first Academy Award in 1975 for his work on Kubrick’s Barry Lyndon. He was knighted in 2003 for contributions to Anglo-German relations and gave his work to the Deutsche Kinemathek in 2012. 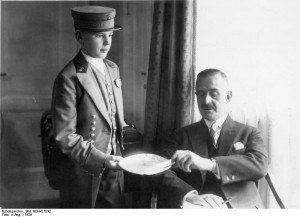 Jet-setting schmoozer that I am, The Sultanette spent a week in Berlin several years ago, as guest of The Antiques Diva and her charming hubby. Beyond trolling the flea market with indefatigable Diva Toma, strolling across the site of Hitler’s bunker, or taking in le jazz hot at the Badenscher Hof, I can offer no better preparation for Sir Ken’s ingenious fabrications than an aperitif in the swank lobby of the Hotel Adlon.

There you will feel the ghosts of former guests Einstein, Edison, FDR, and Thomas Mann, Chaplin, Caruso, Dietrich and Josephine Baker. In 2002 Michael Jackson dangled infant son, Blanket, out the window of the legendary Adlon … CUT! … Or is that the ersatz Adlon!

The original Adlon was built in 1907 across from the Brandenburg Gate on real estate so prime it took the intercession of Kaiser Wilhelm II to raze the fusty landmark Neo-Renaissance palais cluttering the site. It was all but destroyed by fire in 1945 during the last days of the war when celebratory Red Army officers went incendiary in the wine cellar. A remaining wing served as the Hotel Adlon, East Germany until it was entirely demolished in1984. … TAKE TWO! … 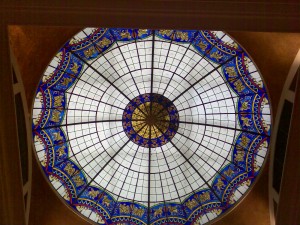 When The Wall came down the Adlon went back up. Bought by a West German investment firm and designed by Rainer Michael Klotz, the reincarnation, inspired by and re-built exactly on the site of the original, opened as the Hotel Adlon Kempinksi Berlin in 1997.

Historical illusion or reality du jour? As Sir Ken told the Guardian about his design of Fort Knox after seeing the lackluster original, “The inside of Fort Knox in Goldfinger is completely unreal. There’s no place like that, any more than the war room I designed for Kubrick’s Dr. Strangelove exists.”

Who says the artful duplicate isn’t as tantalizing as the real thing? Or the mise en scène can’t be savored, bigger than life?