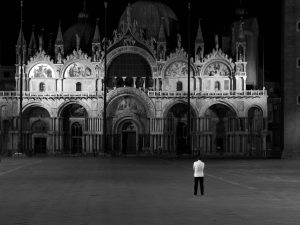 “The black knot of gondolas in the canal of Mestre is more beautiful to me than a sunrise full of clouds all scarlet and gold.” John Ruskin, 1841

Just when you thought it was impossible to see Venice in a new light, La Serenissima sheds her color to reveal her bare essence, as expressed nearly two centuries ago by the Victorian art critic, John Ruskin.

Dream of Venice in Black and White, the third installment in the award-winning Dream of Venice series, continues its intimate portrait of the Adriatic Queen, this time as an homage to the city’s most precious and threatened commodity – her private worlds. 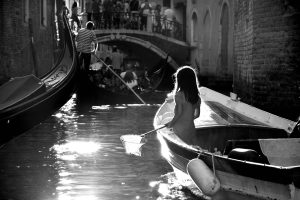 You float through Dream of Venice in Black and White as you would weave among the canals in a gondola. And as you are drawn into the real-life Venice behind the legend, you realize it is the city’s covert existence, not its iconic branding, that gives Venice its magic.

Caught in the glow of lamplight, a gentleman in a fedora, straight out of a Simenon detective novel, glances furtively over his pipe (in fear or anticipation?). Lovers kiss along a mist-shrouded back canal (will he cross the bridge as she continues home?). A woman in a skimpy black dress hurries along the colonnade bordering the Piazza (to meet her lover or to flee from him?) unseen by tourists sipping Campari. 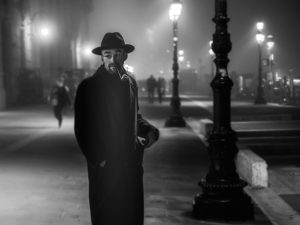 It is the unseen Venice, that concerns this collection of stunning photography. And a question: “What are tourists?” The word has become hackneyed, Tiziano Scarpa suggests in the book’s introduction. Its meaning is “from another age.” With increasing numbers of visitors inundating historic cities on bargain travel incentives, he says, the “tourists” of today have become “the new residents of the world.”

When Ruskin visited nineteenth century Venice there was only one class of travel – privileged. Yet journeys were embarked upon for exploration, reflection, and self-discovery. As John Julius Norwich tells it in Paradise of Cities (titled after Ruskin’s moniker), Venice would become the subject of Ruskin’s “endless philosophizings” inspiring his three-volume tome on art and architecture, The Stones of Venice.

The trip that inspired his 1841 quote above was made at the urging of his new wife, Effie, an “outstandingly pretty Scottish girl” according to Norwich. Alas, Effie’s charms were not enough to distract Ruskin from his love affair with La Serenissima. “Nothing interrupts him,” Effie wrote to her mother from the Hotel Danieli, “and whether the Square is crowded or empty he is either seen with a black cloth over his head taking Daguerreotypes or climbing about the capitals covered with dust.” 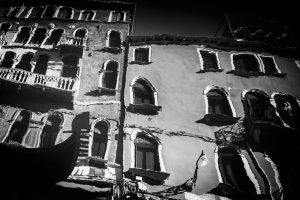 Beneath his black cloth, Ruskin was getting intimate with la laguna. “Daguerreotypes taken by this vivid sunlight are glorious things,“ he recorded in his journal. “It is very nearly the same thing as carrying off the palace itself.” His description of the palaces that “lift their shafts out of the hollow sea, their mighty towers sent up to heaven like tongues of more eager fire,” is positively pornographic.

“It is as if the Ruskins’ marriage was being consummated through Venice’s female symbolism which it was denied in their conjugal bed,” observed cultural geographer, Dr. Denis Cosgrove. But any Sultanette could have deduced that. 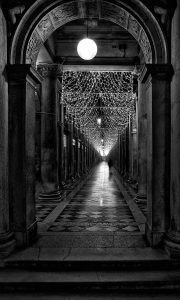 But beyond the gaze of randy boys-in-uniform was “the most exquisite place I have ever seen,” Effie writes, describing the Piazza as “a vast drawing room lighted enough by the gas from the arcades all round the square … with a dense crowd in the centre of men, women, children, soldiers, Turks, magnificent Greek costumes and sky above studded with innumerable twinkling stars.”

Above all, the floating city presented a separate world from the norm and the known. “It is so delicious to think that you can never be run over,” Effie rhapsodizes. “No carriages, carts, horses, barrows or anything but people and gondolas.” What would she have thought to see dozens flee in panic when a cruise ship rammed into the city center, as it did on June 22, 2019. 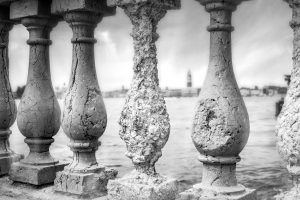 Ruskin sensed the impending doom. Even as Venice was unable to save his marriage, he predicted that the city would be unable to save itself. “The crowds of travellers of different nations, who have lately inundated Italy,” he lamented, “have not yet deprived the city of Venice of much of its original character, although … the shade of melancholy upon its beauty [which] is rapidly increasing, and will increase, until the waves which have been the ministers of majesty become her sepulchre.”

Scarpa sites a past study calculating that Venice could sustain twelve million visitors annually. The yearly number of visitors now tips thirty million. “So what can you do about it?” he asks.

And this is where Dream of Venice in Black and White departs from the guidebook map. Where it invites you to explore the Venice behind the horde of tourists and wall of cruise ships. To have a love affair with the real Venice, the concealed Venice, that beckons between dark and light.

Countless images of Venice are recorded now, not from under a black cloth but at the end of selfie sticks. Instead of looking beyond, these tentacles look back at the photographer. The explorer, not the explored, is the star now. Venice is in the background. 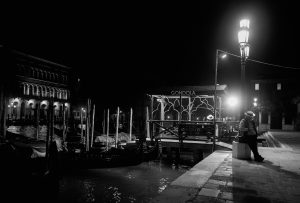 It is the world behind the tourist scene – that different way of seeing – that Dream of Venice in Black and White brings out of hiding. The sensuality of Ruskin’s palaces and the stars twinkling over Effie’s theatrical Piazza. The Venice beyond the known, that invites self-discovery instead of more selfies.

“Perhaps a paradoxical way of helping this city,” Scarpa suggests, “would be not to come at all. Instead, stay home and leaf through books of photos like this one, which inhabits the city delicately.” To that, The Sultanette offers an additional enticement.

Paging through “How To Spend It” in the Financial Times a few weeks ago, I came upon a profile of perfumer Christine Nagel. She recently created a fragrance for Hermes, inspired by a visit to the Garden of Eden on the Venetian island of Giudecca. “It’s a secret garden,” she tells Christina Ohly Evans in the FT profile, “planted by an Englishman in the late 1800s, and its full of jasmine, orange blossom and magnolia and rose – all mixed with the salty Venetian air.” 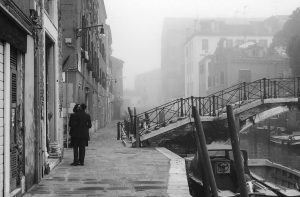 The next time Venice calls, why not first splash yourself with Un jardin sur la Lagune. Then, unthreatened by looming selfie-sticks, careening cruise ships, and over-crowded cafés, drift through Dream of Venice In Black and White, and get intimate with your own private Venice. Isn’t that what traveling used to be about?

All photographs from Dream of Venice in Black and White.