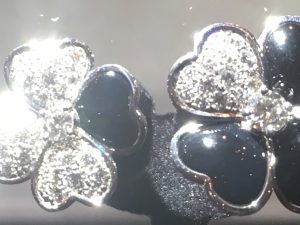 B&W in bloom from “Flora”

As if we don’t owe the French enough for teaching us how to tie a scarf, now the culture connoisseurs offer us another life lesson. No, I’m not talking about how to elect a president with the smarts to marry a woman old enough to be his mistress. I’m talking about L’Ecole Van Cleef & Arpels. Liberty, Equality, Jewelry!

Shortly before the French hit the polls last week, I headed to a presentation on Van Cleef’s School of Jewelry Arts hosted by the Albertine Library. 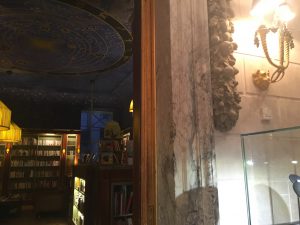 A project of the cultural services of the French embassy, Albertine is an intimate alternative to the Metropolitan Museum of Art holding court up the street. Its calendar of events features the latest in literature, dance, art, and of course philosophy (France’s Mick Jagger of punditry, Bernard-Henri Lévy, spoke there).

If you simply want to partake in the French art of dawdling, the book store is an oasis on Fifth Avenue. With its dreamy, star motif wallpaper, it could be a scene from Le Petit Prince. Comfy leather chairs, velvet settees and books in French and English ranging from graphic novels to fashion, food, architecture, literature, and politics beg you to browse. 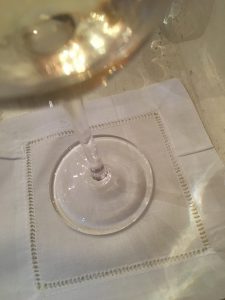 Bottoms up at “Flora”

Entering the foyer for the presentation, any doubt that I was now under French jurisdiction was dispelled when I was handed a glass (not plastic) of wine with a starched linen (not paper) serviette (not napkin). Vive la France!

I followed the chatter into the main gallery. Not a fashion victim in sight among the standing-room-only crowd of all ages – all there to learn about “Flora and the Art of Jewelry” from the jeweler who has decorated the Duchess of Windsor, Grace Kelly, and Elizabeth Taylor. 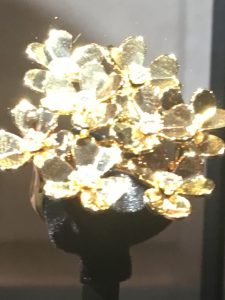 Bouquet of bling at “Flora”

Two professors from L’Ecole Van Cleef & Arpels faculty, Inezita Gay-Eckel and Gislain Aurcremanne, briefly described the courses which attract jewelry lovers from all over the world to an 18th century Paris townhouse (details below). They then treated us to a bouquet of nature-inspired bijoux – stunning pieces designed from the fleur-de-lis, orchid, chrysanthemum, poppy and rose. (In the French romantic tradition, a red rose symbolizes love while the yellow rose allows for cheating.)

Beginning with the dawn of ornamentation – basically the fig leaf – we were transported through the Middle Ages and Renaissance, the Mughal Empire and Victorian times, Art Nouveau and Art Deco periods based on holdings from the Musée des Arts Décoratifs in Paris. Along with descriptions of each piece’s provenance, the presentation was sprinkled with historical anecdotes. 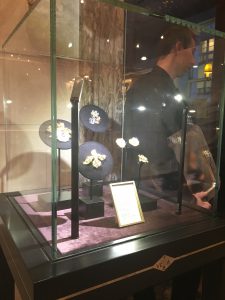 Jewels to drool for at “Flora”

If you had a few francs on you in 1887, a bargain might be yours at the Louvre fire sale – an auction celebrating the firing of the royals. With the last emperor, Napoleon III, replaced by presidents of the Third Republic, the crown Jewels went on the block. “No crown, no crown jewels” said Gay-Eckel, producing a collective gasp from the audience.

And if you think coordinating your Birkin Bag and Manolos is daunting, imagine the woman of Victorian times (the “matchy-matchy” period according to Gislain) when the lady of the house was required to coordinate her accessories with the colors and theme of her interior decor. 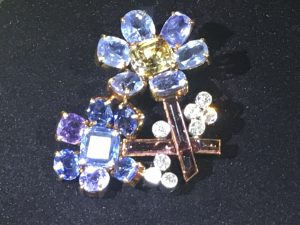 To the age-old dilemma, “He Loves Me” or “He Loves Me Not” the most useful French factoid concerned the humble daisy. No settling for “oui or non” here. In France, the daisy augurs six possibilities: Oui (Let’s have at it), Oui un peu (Try me), Beaucoup (What are we waiting for?), Passionnément (Why do we still have our clothes on?), A la folie (Where’s the whip?), and finally, Pas du tout (The park’s closed). 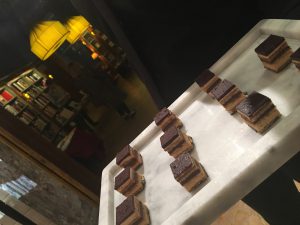 After consuming all that eye candy, the only possible fallback was patisserie and the reception after the lecture did not disappoint. While drooling over glass cases of exquisite baubles, The Sultanette probably grabbed a few too many yummy confections. But I’ve never regretted the extra nibble.

The Van Cleef & Arpels School of Jewelry Arts is located in the Place Vendome a stone’s throw from the Jardins des Tuilleries. Fourteen courses of four hours

are led by jewelers, art historians, gemologists, and watchmakers.