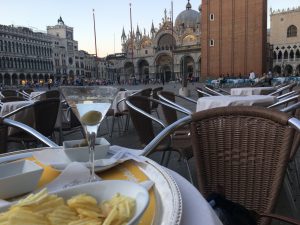 To that I say, isn’t it time we take sex out of the gutter? That we give it credit for more than scratching an itch in the libido? Admit that getting physical might release us from the tyranny of our brains? From those hidebound convictions, selfish inhibitions, and pious sentiments that sabotage our ability to live originally? If you don’t think architecture does that, read on. 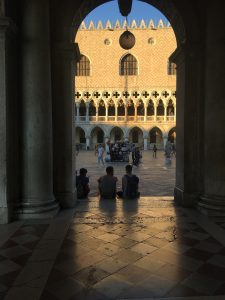 The adventure began innocently when a fellow architecture enthusiast invited me to join a private tour to my favorite lagoon for the Biennale. This year’s theme, Freespace, was enticing. Its intent, according to directors Yvonne Farrell and Shelley McNamara, was to encourage “new ways of seeing the world, of inventing solutions … for the well being and dignity of each citizen of this fragile planet.” And our tour’s organizer, Anna Canepa of Art Tours, would be the ideal guide for exploring it. An art historian and connoisseur, she was connected, resourceful, and wily as a doge. 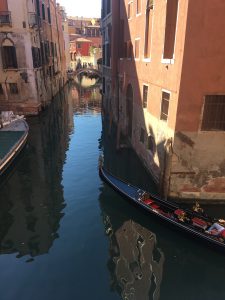 View from The Sultanette’s window.

First treat was the scene below my hotel window – a slender canal straddled by bridges, gondolas gliding by, the whelps of gondoliers as they rounded the bend echoing in the narrow passage. Over the next two days, a private guide introduced us to the Biennale’s two main venues, the Arsenale and the Giardini, with the idea that we could return on our own recognizance to delve into areas of particular interest.

At the Giardini, home of the first Venice Biennale of Art in 1895, we strolled among the thirty permanent international pavilions built on marshland that had been transformed into gardens by Napoleon in the early nineteenth century. (It was the least he could do for pawning the Venetians off to Austria.) 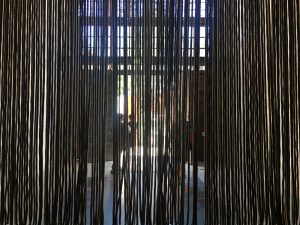 At the Arsenale, we entered through a swaying curtain of hemp – an homage to its early rope manufacturing. The massive space had produced Venice’s trading vessels from 1104 until Napoleon’s conquest in 1797. Now it was dedicated to the Biennale directors’ curated installations.

“The role of architecture is to give shelter to our bodies and to lift our spirits,” they had stated in the manifesto. The breadth and originality of responses rose to the occasion. Beyond corporate-posturing or patriotic chauvinism they were ingenious, energetic, and earnest. The intent was palpable. 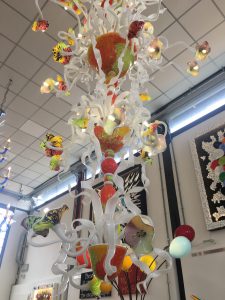 Turned on yet? No worries, the naughty parts are yet to come. But first, a private tour of Peggy’s place (do I need to say, Guggenheim?) plus side trips to Padua and the audacious glassworks at Schiavon Vetreria Artistica on the island of Murano. And did I say cocktails at the palazzo with the countess? (If I revealed her name I’d be at the bottom of the lagoon, but I can tell you there was a doge in the family).

As intoxicating as the pitcher of Bellinis served by the countess was the Punta della Dogana Museum. Originally the Sea Customs House completed in 1682, the building had now been transformed by the brilliant hand of Japanese architect Tadao Ando, to showcase the Francois Pinault Collection. If you concentrated, you could even convince yourself you felt the floor sway ever so slightly to the shifting Venetian tides. A perfect reflection of the current show, “Dancing with Myself.”

The museums’s open, airy galleries featured artists including Cindy Sherman, Gilbert & George, and Maurizio Cattelan. But what for me best expressed the exhibition’s title was a looped film, presented on a wall-mounted screen, of a Black woman dancing nude throughout various museum galleries. The dancer was artist, Lili Reynaud-Dewar. Her strong, graceful silhouette brought sensual relief to the stark gallery walls. Her nubile movements flirted with the frozen artifacts on display. Reynaud-Dewar dances in homage to Josephine Baker, our museum guide told me. She believes that art is about taking personal risks, and about blurring the boundaries between personal and public space. 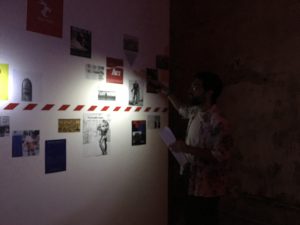 Fitting foreplay to the exhibition at the Cruising Pavilion at Spazio Punch titled “Gay sex, architecture and cruising cultures.” While not officially affiliated with the Biennale, curators Alexandre Mateos, Rasmus Myrup, Octave Perrault, Charles Teyssou sought to use the idea of public sex to challenge the full meaning of the “Freespace” theme.

The show was housed on three floors of nearly pitch black galleries, visible mostly by flashlight. Soundtracks included the beloved Sylvester, RIP. Themes increased in shock value as you ascended, concluding with a film I dare not describe or your firewalls would explode. At its May 24 launch party, drinks and poppers were served. 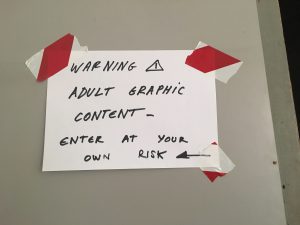 Welcome to the art of Cruising.

As Sangeeta Singh-Kurtz, described it in her Quartzy review, “Keep Calm And Cruise On” the show takes cruising from “deviant and dangerous” to “thrilling and affirmative.” But as the curators suggest, is cruising now a lost art, replaced by Apps like Grindr? If so, can high-tech ever replace the high art of a sultry glance?

Vatican to the rescue! Our final stop was the Pavilion of the Holy See, the Vatican’s first-ever Biennale contribution. In a wooded area on the island of San Giorgio Maggiore, architectural historian Francesco Dal Co has curated ten chapels with the purpose of showing “how the chapel can exist as isolated building, free from the attachments of specific religious sites.” 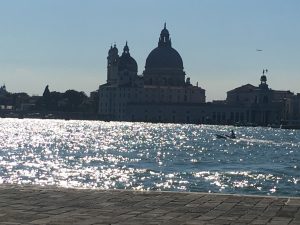 Venice and her sea.

Perhaps the most sacred of these was “View” by Norman Foster of Foster+Partners. Its goal was “to create a small space diffused with dappled shade … focused on the water and sky beyond – a sanctuary.” That view was the true star of the Biennale – the brilliant, persistent romance between Venice and her sea. Are we now destroying this fragile bond? It will take more than a Pope’s prayers to save it.

On the final evening of this magical tour, we were guests at a private dinner in a 16th century palazzo on the Grand Canal. Hors d’oeuvres on the terrace, risotto impeccably al dente in the dining room, pleasantly-aged brandy in the parlor, exceptional hosts, intriguing conversation. What more could you ask of Venice … except a chance meeting with a handsome stranger at the Doge’s Palace. Check! 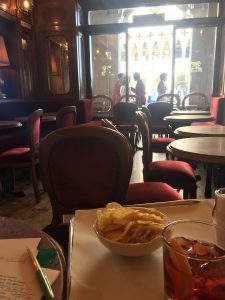 Venice in the afternoon.

It happened on our one free afternoon. I had found a cool, quiet corner inside a café – protected from the army of tourists milling outside the Doge’s palace – to work on the book that will, if The Sultanette survives it, be required reading. After several uninterrupted hours and a Compari, I strolled outside to the water’s edge, thoughts of my first trip to Venice as a young bride.

I was snapping a photo when a man I’d noticed eating ice cream nearby, took it upon himself to recommend the best angle for capturing the light. He was tall, elegantly aged, carefully dressed. His accent was from another part of the world. As we spoke, he took each bite of ice cream from the small, wooden spoon with polite fervor, then excused himself to dispose of the cup, and returned. “Shall we walk?” he said. 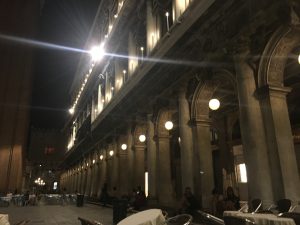 In the Piazza San Marco, we exchanged email addresses and connected on WhatsApp. He was leaving the following day and so I agreed to meet him in San Marco after dinner. Did the conversation continue to the whelping of gondoliers outside my hotel window? Of course not. And if it had?

“The role of architecture is to give shelter to our bodies and to lift our spirits.”

The 16th International Venice Biennale continues until 25 November. And if you’re tempted to experience more of The Sultanette’s Venice, see previous posts: What Happens in Venice, Stays in Venice, plus book reviews  – A Venice Valentine and Venice Anyone? – of the seductive Dream of Venice series published by Bella Figura.