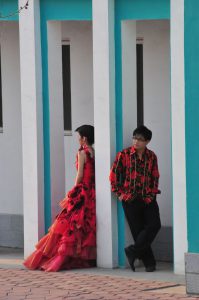 Open on woman alone in cozy living room. A sudden shattering of glass breaks the stillness as a man bursts through French doors behind her. He is hooded, all in black. He throws her to the ground. She thrashes back. Vases crash. He takes her violently and disappears.

I almost left Elle after Isabelle Huppert’s first rape scene, already skittish at the thought of returning to my New York apartment, alone with the image. Yes, I did say “first rape scene” and yes, I’m glad I stayed. Because after its brutal introduction the film, this year’s Golden Globe Award for Best Foreign Film, takes an even more kinky but intriguing turn. Read more . . .