Were it not for my tweeps clamoring for a report on the Kentucky Derby, the following post including sex, nudity, gambling, and the excessive consumption of mint juleps and biscuits with gravy would have been quietly filed away in the annals of The Male Harem.

So first let me say in my defense that none of the following was premeditated. As you all well know, when I chose a life more provocative than predictable, I unloaded past ballast, let go of daydreaming about the future, and staked my tent in the spontaneous present.

So what better place to begin than an impromptu tumble atop the grand piano of a darkened stage in the empty ballroom of a swanky midtown Manhattan hotel? (Stay with me, tweepettes, we’ll get to the Derby soon.) It had started innocently enough when the gregarious and persuasive Piano Man emailed me to join him at his hotel’s cocktail lounge conveniently located near my freelance gig. And when I later declined his suggestion to continue the conversation in his deluxe suite, he kindly offered to escort me through the lobby to a cab. 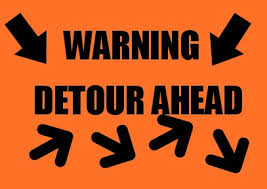 Though I suspected Piano Man was an operator, I hardly expected a detour to the ballroom. I’d been served many a plate of rubber chicken in that venue but I’d never been lifted to the heights of its onstage Yamaha and offered a tasting menu. Rest assured The Sultanette made it to the taxi stand with lily white reputation in tact but I won’t deny the grin I was wearing. The fun of being swept off my feet, literally. The risk of getting discovered by a hotel event planner while being tickled on the ivories. The heat of passion caught off-guard. It beats cold leftovers in the frig. 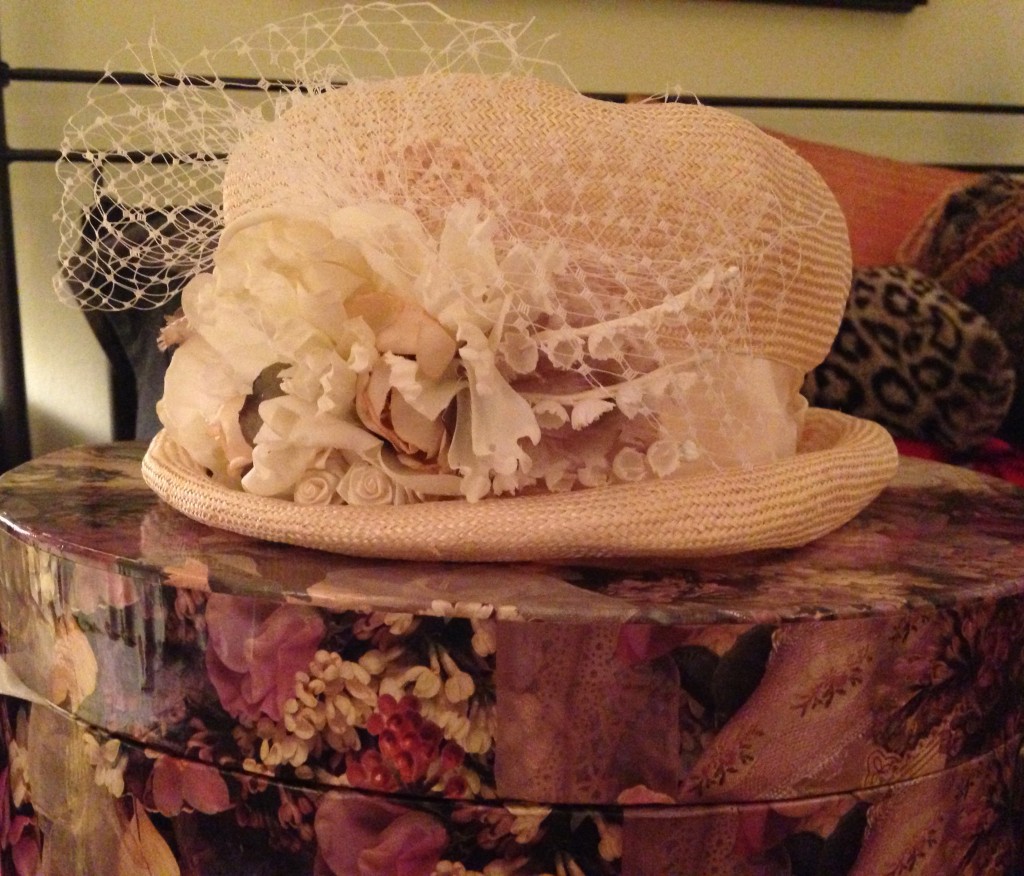 Time to escape Manhattan and slip into the easy momentum of a road trip with Young Preppie whose ancient insights and wry humor make for endlessly delightful company. (His spiffy Jaguar doesn’t hurt for creature comforts either.) The original weekend plan had been to explore his family’s roots in the Kentucky mountains, so learning that his father might have free tickets to the Derby was a game-changer. I borrowed a hat from a former Derby dame and packed a chirpy yellow dress in my duffel bag alongside T-shirts and hiking boots.

The tickets came through – and through. Doesn’t everyone drive to Louisville in a Jag, stop for breakfast in a private rail car at the train station before being bused to Churchill Downs (leave the parking to us) and a suite on the inside track with hot and cold running help shaking up mint juleps on the upstairs deck? Were there horses? 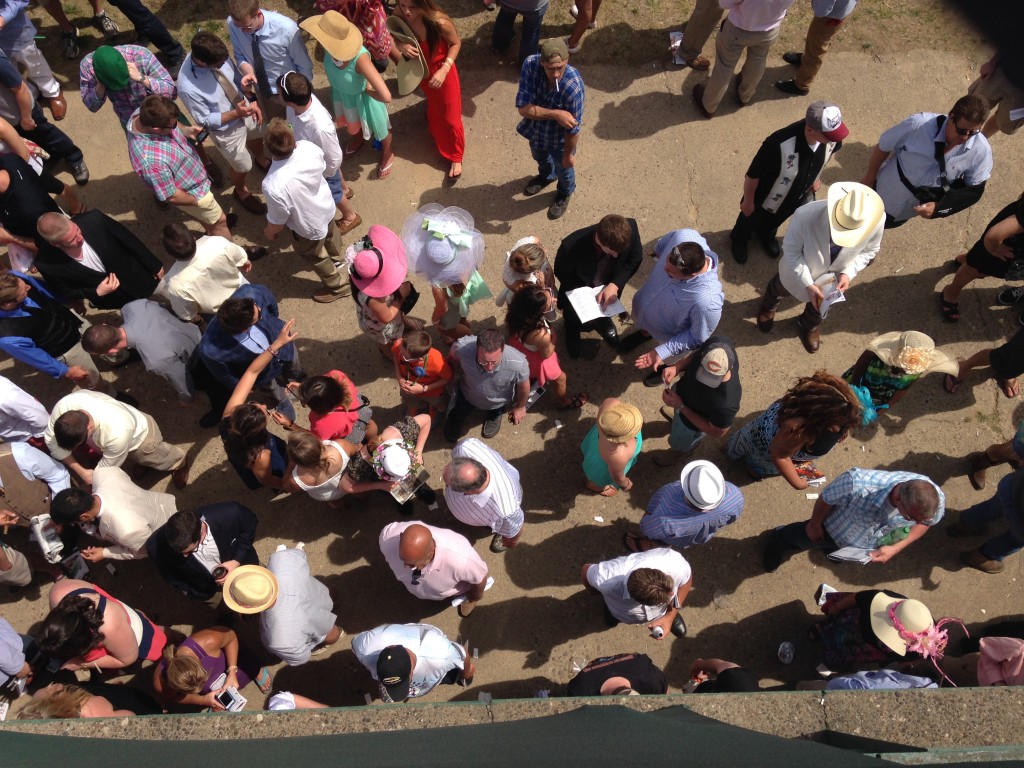 The Sultanette’s view from above.

Sometimes it’s good to get lost in the crowd and others it’s just dandy to be above it. My chapeau was the perfect shield to the ideal 70-degree sunshine, and Young Preppie, a card-carrying Kentucky Colonel in his pastel Brooks Brothers’ finery, was a princely date.

Pressed against the suite’s upper deck railing minutes before the Derby race began was more thrilling than I’d ever imagined it could be after watching it for years on the tube. In honor of The Male Harem, I’d put money on Candy Boy – luckily only the cost of a tube of Chanel lipstick because the sentiment profited nada.

But when the gates flew open and those sleek, sinewy, powerful creatures thundered past just below my chin I understood why this world could completely seduce. More than about winning, it was about witnessing the exquisite convergence of strength, will, heart and grace in “the most exciting two minutes in sports.” That’s how a thoroughbred lives in the moment.

Moving from the sublime to the outrageous, let’s fast forward to four days after returning to New York. Come with me down an all but forgotten spiral staircase, plaster crumbling from its surrounding walls. We check our coats in a makeshift hallway, then walk through a doorway to an explosion of music, stylish partiers and high-camp glam. 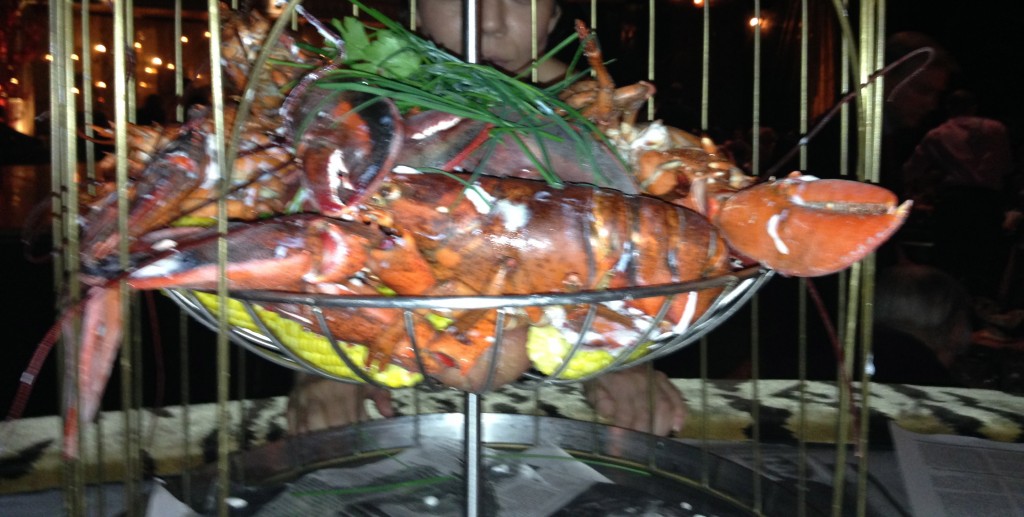 We are in the basement of the Paramount Hotel at a neo-theatrical experience involving audience participation called Queen of the Night. For the next three hours we will be exposed to unrelenting stimuli, e.g.; a long stage presenting a narrative starring a lithesome, haughty Queen interspersed with acrobatic acts; the sudden appearance at our table of metal contraptions piled with lobsters and chunks of meat to be eaten or bartered with fellow diners at will; the post-dining clearance of said plates performed by men in white helmets and jumpsuits who sweep all tables clean in one urgent drive-by; rafter-pounding music. 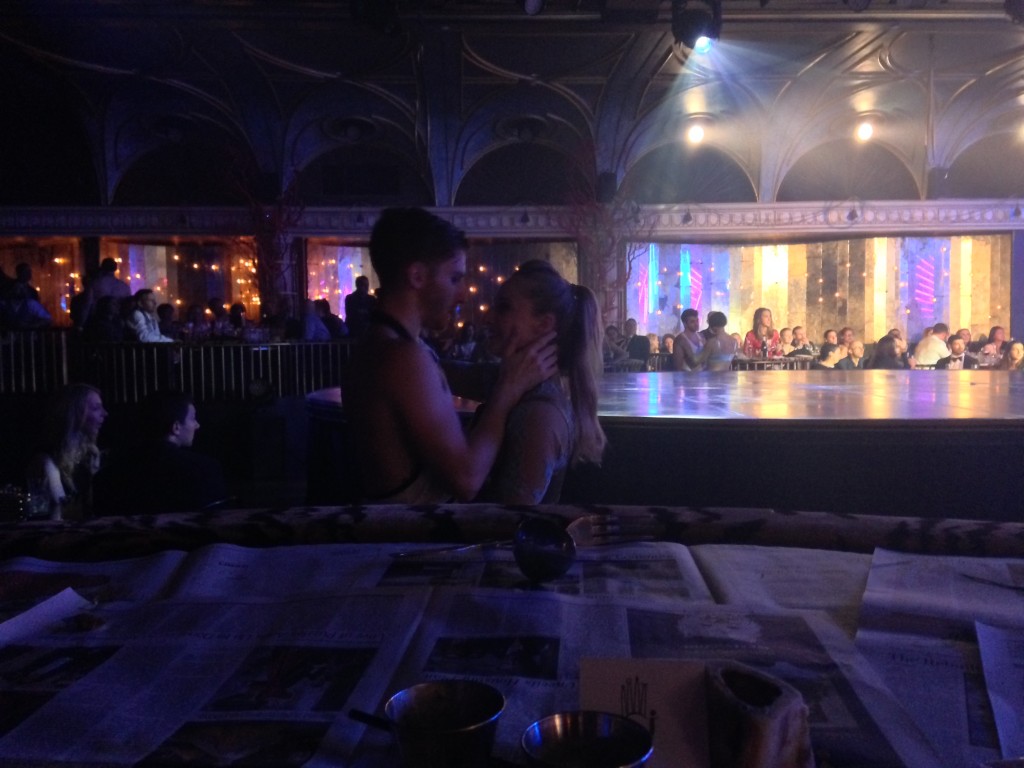 Courtiers to the Queen.

I was doing my Sultanette best to ingest it all with two favorite friends and Dr. Zhivago, when the Mystery Maiden appeared. Taking my head in her hands, she looked into my eyes and in a deep, delicately accented voice (from where? Bali Ha’i?) invited me to follow her. I was riveted. We walked down a low candlelit hall to a cave-like room. More flickering candles lined the edge of a deep bathtub under an arched ceiling. (NOTE: The memory blurs here between reality and the fantasy of memory.)

Mystery Maiden held up a white sheet, concealing herself behind it. “Would you like to take a bath?” I looked at the tub, steam rising from glass-still water, and said to the sheet, “You mean take my clothes off?” “Yes,” came the calm reply. And there it was. I slipped out of my black silk dress. Gold shoes. Wolford stockings. Cuff bracelets. Fingerless gloves. Untied the gold ribbons of my crystal necklace. The sheet waited patiently. Next thing I knew, I was swaddled in cotton and sinking into delicious warmth. I was alone now. Muffled pounding music seeped through the thick stone walls, just enough to remind me there was a world out there. What I remember most is breathing. 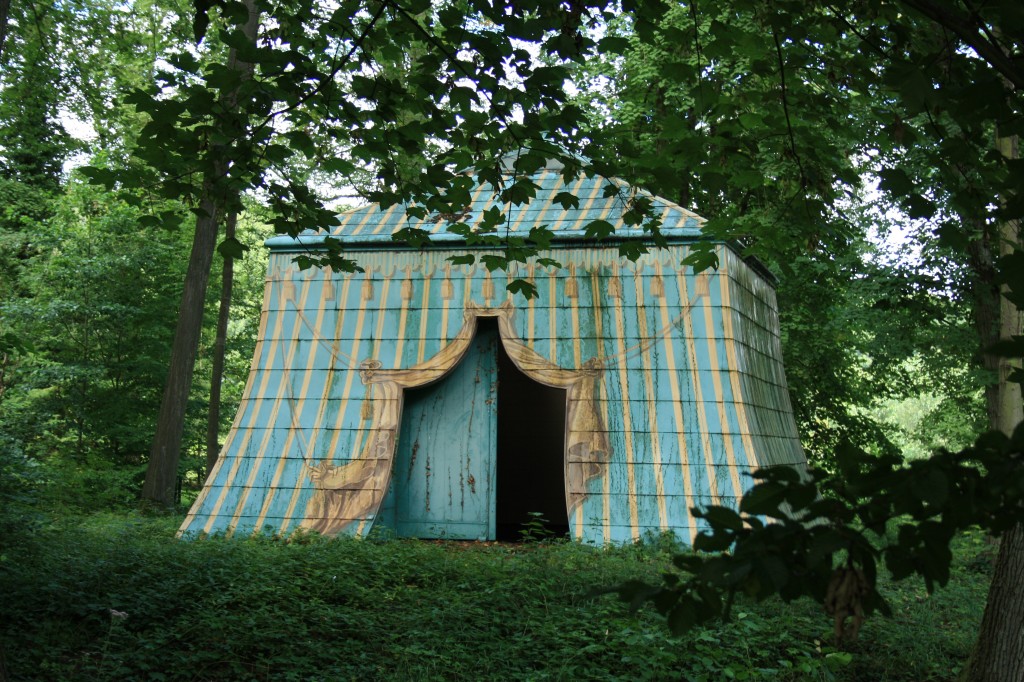 Minutes later (how long was it?) Mystery Maiden fetched me. When I  got back to our table, Dr. Zhivago and friends looked at me as if I’d just come off of the space shuttle. Where had I been? What had they missed? What had happened?

Oh, just another encounter with the unexpected where I live. It’s not always this good. Uncertainty is exhausting. Doubt wakes me up at night. I wonder if I’ll be punished for choosing to be desired rather than required, and answering to myself before pleasing the herd. But as long as I can do it with strength, will, heart, and grace, I’ll keep staking my tent in the heady combustion of spontaneous moments. And I’ll dress, or undress, for them all.