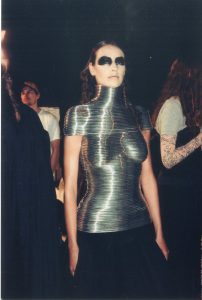 With the simultaneous release of documentaries on both enfants terribles, I decided to chase down the theory one steamy summer weekend in Manhattan. (Bad boys are always persons of interest to The Male Harem.)

I worried that McQueen would be a sycophantic fashionista homage but directors Ian Bonhote and Peter Ettedgui have produced a stirring elegy to McQueen’s troubled genius. The film deftly weaves the details of McQueen’s life – distant father, fiercely supportive mother, Savile Row apprenticeship, gigs at Givenchy and Gucci – with rapturous footage of his collections.

The couture wunderkind didn’t need the anointing of established fashion houses to claim his glory. His innate urgency to express himself projected him forward. From his earliest collections, cobbled together on a dime, to the theatrical extravaganzas of his later years McQueen’s vision was utterly personal. 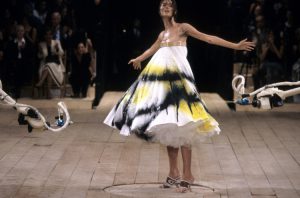 His pure, raw, and eventually destructive passion produced collections like The Hunger, Highland Rape and It’s a Jungle Out There. He pushed beyond the limit without ever looking contrived. When he is asked in the film who might take on the brand if he stepped away, he is sincerely flummoxed. There is no ego in his reply. Only McQueen can be McQueen.

As he polishes his public persona – shedding the scruffy working-class kid for the svelte fashion magnate – one senses his denouement. McQueen isn’t wired to fit a mold – fashion or otherwise. He doesn’t care what other people think about him, he says in the film, or even what he thinks about himself. What freedom. The freedom of a true artist. And also the loneliness.

With the death of his close friend and advocate, the relentlessly eccentric Isabella Blow, the oxygen begins to seep out of his life. The death of his mother marks the final emptiness. The darkness he’s held at bay can no longer be tolerated. On the eve of his mother’s funeral, he commits suicide by hanging. There is no air left to breathe.

Yet the film captures more of McQueen’s light than his darkness. When he is in play creating and producing his collections, his joy leaps off the screen. It draws those around him to his flame. Makes them complicit in his lurid vision. His models don’t just swagger haughtily down the runway. They push against mirrored barriers, wring out emotions, breasts exposed and vulnerable. 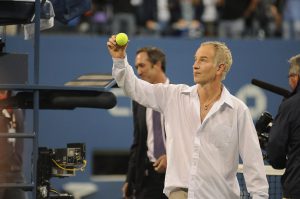 Where McQueen battled with darkness, McEnroe seemed to thrive on it. The French documentary, In The Realm of Perfection suggests that he needed to create a hostile environment in order to conquer it. If only the film could have left him alone to prove it.

LA Times film critic Kenneth Turan wrote that this “idiosyncratic, metaphysical meditation on tennis, cinema, human behavior … at times risks being too pleased with itself for its own good.” You think?

In the opening scene, a meticulous demonstration of a hand gripping a tennis racket is repeated. And repeated. We are then marched through an archive of vintage tennis instruction films, stick-figure renditions of McEnroe’s moves, and a tutorial with frames actually titled “A” and “B”. 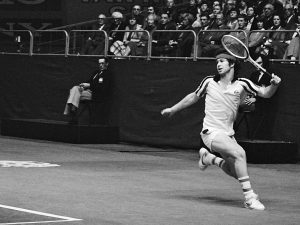 The Sultanette’s Francophilia might be near-fatal but I’m not completely blinded by the glow the French have bestowed on civilization since the Sun King. I even allow that some concepts can be explored without employing the words “paradoxical” and “ambiguity” and the phenomenon of John McEnroe is one of them.

When the drumbeat of analyzing lands on the keen observation that he “plays on the edge of his senses” we are at last treated to un-narrated footage of McEnroe in play. Whatever you feel about the prince of impudence, it’s his individual ferocity that dominates the screen – his inscrutable game strategy, balletic form, obsession to win every stroke.

Alexander McQueen and John McEnroe remind us that daring to be yourself isn’t for the faint of heart. Whether you play it out on the court, the runway, or life’s runway, it takes grace and grit, incalculable risk, and Olympian resilience. If that’s too much for you, there’s always Sunday brunch.