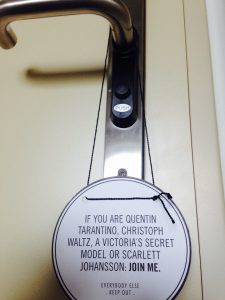 Instagram posts with #solotravel just topped 5 million. Searches for “solo travel” on Google Trend have doubled over the past five years. These stats are brought to you by Nina Sovich’s Wall Street Journal piece “Alone Again, Blissfully” (Saturday/Sunday, 9/21-22). And this is not about boomers on cruises. According to Sovich, millennials are leading the way, and if you don’t know they’re in charge you’re on vacation in Siberia.

The easy explanation is that we’ve become a nation of commitment-phobics, our most intimate relationship with our smart phones. But Sovich suggests that beyond our technical devices, we’re discovering another significant other. Ourselves. And that rather than a sign of arrested development ”being alone is an expression of sanity and self-worth.” 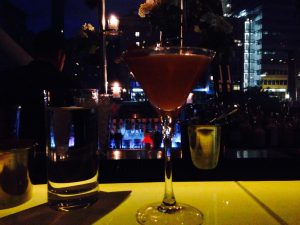 I have cherished memories of traveling with Male Harem members (as much in the hotel room as out). But I can recall equally rich moments traveling with a favorite ménage à trois – me, myself and I. The Sultanette proposes that when traveling solo – not enclosed in the bubble of another – we’re more open to those around us. And the world responds. “People talk to you more when you travel on your own,” observes Molly Dunn, a brand strategist, single in New York City, who has caught the solo travel bug.

But even couples are loosening the knot to experience a solitary getaway. “Solo travel no longer means you are single” says Robin Brooks, director of marketing at UK-based Exodus Travels, who notes that more married people are traveling alone. Example: The couple from Austin, Texas, married with two kids under five. He’s in tech, she’s in a startup. They tag-team vacations with childcare, so they can pursue separate passions. “We all have our unique interests,” says Brooks. “Just because you love someone doesn’t mean you can travel with them.” 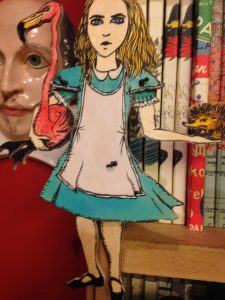 Alice goes solo in Wonderland as Shakespeare looks on.

And single women are going four star. They make up nearly half of the clients of the high-end travel agencies in the Virtuoso network, and 300,000 members on the Solo Female Traveler Facebook page. So never mind that maître d’ in Vienna who piteously replied to me, “I’m sorry” when I told him I would be dining alone.

Unwilling to be maître d’ shamed, I made my way the following night to the renowned Purstner, known for its wiener schnitzel – pounded tender, delicately breaded, the size of a Frisbee. But getting there offered the downside of traveling alone – getting lost without a travel buddy to help make sense of the GPS. “Ah yes! Just take a right and two lefts” said every helpful citizen I stopped along the way, but no combination of turns yielded my destination. 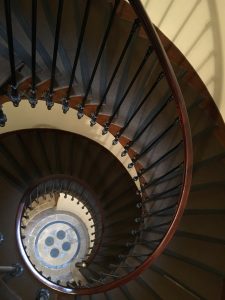 Winding up in Paris.

Through sheer resolve for a schnitzel fix, I finally stumbled upon Purstner, and the maître d’ greeted me without a trace of contempt for my single reservation. “Excuse me,” I burst out by way of explaining why I was thirty minutes, “but how is it that everyone tells you to take a right and two lefts, but I never find my way?” He smiled graciously, leaned in and said, “Madame, what you must remember is that Vienna is a circle. One never turns completely left or right.”

I never lost my way in Vienna again. And I realized that day that if you just keep walking in narrowing circles, you’ll always arrive exactly where you need to be. Which brings me to a favorite destination on The Sultanette’s bucket list: Serendipity.

It was a chilly, dismal afternoon in Paris. I was rattled from the all-night flight, the passport line, the treasure hunt to my Airbnb in the quartier Bastille. A brief walk would clear my head. As I turned down a bleak Faubourg St. Antoine it began to drizzle. I passed a park populated by scraggly pigeons. Considered buying a Paris Match at a newsstand to practice my woeful French. Why had I fallen for that cheap flight so late in the season? Why was I … alone? 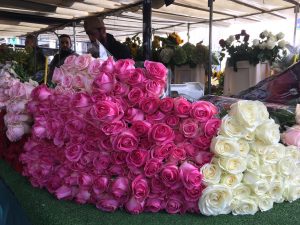 A bouquet of Paris.

And then as if bursting from shades of grey to technicolor, Paris presented herself. Not the Eiffel Tower or Champs-Elysées or Hotel de Crillon Paris, but the Paris of the Marché Bastille. The street before me was lined with purveyors of piled-high pommes and poires, artichauts and champignons. And Parisians going about their day. Mothers with small children, workers on their lunch break, grandmaman with her shopping cart and faithful terrier. 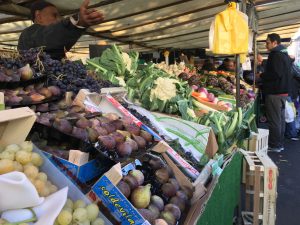 At the end of this street, the marché opened into a lot bearing a trove of tchotchke’s – books and cooking pans, scarves and gloves, ashtrays, candles and costume bijoux. An hour must have slipped by when I realized I was hungry. I had retraced my steps to the food stalls on my way to finding a restaurant along St. Antoine, when I spotted a chalk board with one word that needed no translation. Couscous! An arrow pointed towards a nondescript restaurant behind a tower of cabbage heads.

Inside, I was greeted by blessed warmth and a smiling proprietress. With lunchtime over, I chose one of the four empty tables, placed my order, and watched her scoop it into a bowl from a trio of battered pots steaming on a tiny stove. After presenting it to me, she sank down at one of the tables to watch the crowds go by. 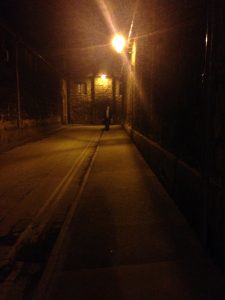 And as the spicy couscous warmed my bones and cleared my jet lag, we began to talk: How it was cold out there, and where I was from. How she had moved from Algiers with her husband and child, and life in Paris and New York. Is that really what we spoke about in our clumsy attempts at French and English? Did it matter? We were two women taking a pause from life on a rainy day at the Marche Bastille.

When you travel solo, you quickly learn that you’re not alone. It’s the world you’re traveling with. An interesting stranger, another story, and a new adventure waits at every turn. Join the crowd.