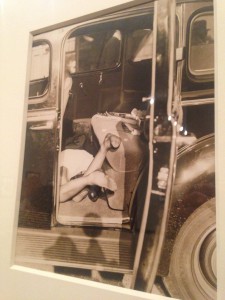 Head over heels at The Met.

Welcome to the perilous days of April, fellow Americans, when we’re reminded that nothing is certain but death and taxes, and that cheating (not the fun, sweaty kind) is a patriotic duty. So what better inspiration than a trip to New York’s Metropolitan Museum of Art exhibit, Crime Stories: Photography and Foul Play.

Encouraged by Andy Battaglia’s Wall Street Journal review promising “shady characters, dirty deeds and their often grizzly results” I hopped an uptown subway to the Met, still a sacred monument to art in spite of its jazzy new logo.

Enter under your own risqué.

Threading my way past heroically endowed Greek warriors in the buff and ermine-clad monarchs in gilded frames, it was a relief to face the raw candor of honest criminals and the exhibition’s inviting threat of graphic subject matter. “Rangy social outcasts” is how the opening salvo described the gallery of reprobates – always on the Sultanette’s A-List. 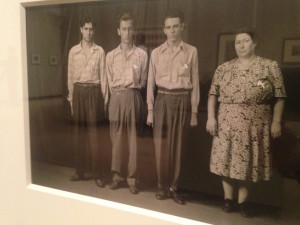 The first set of assorted characters, posed for booking shots at the Chicago Police Department, hardly looked menacing. One woman reminded me of my Aunt Annette Krystowiak whose closest brush with crime was cooking blood sausage in Milwaukee. The men might have been posing for a Dolce and Gabbana spread. 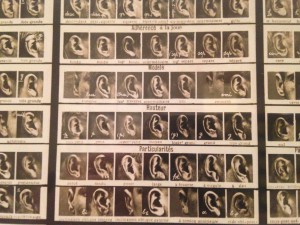 Lend me your ears!

On to a more encouraging crew – French anarchists. Sniffing them out in late-19th century Paris was dealt with in such scrupulous detail by French criminologist, Alphonse Bertillon, suffering the process became known as being “Bertillonaged.” As curator Mia Fineman explained it to Battaglia, “If you really wanted to make sure you had the right person, you would look at the shape of their ear, which was unique.” Credited as the first mug shots, these are selfies on steroids. 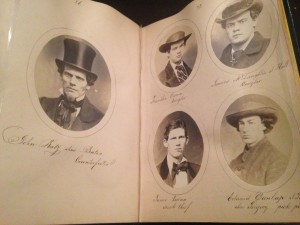 If you were looking for naughty nightstand reading in 1860, you’d click on Amazon (What! There was no Amazon!) for Rogues: A Study of Characters. Compiled by Samuel G. Szabo, its medley of bad boys including sneak thief, highway man, lifter, and wife poisoner, are straight out of Dickens. Each entry, labeled in elegant script, purports to uncover criminality through physical characteristics. 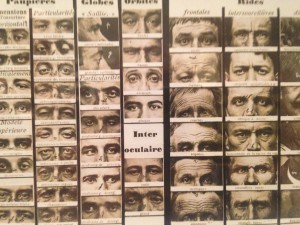 The eyes have it!

Why have we made such a science of exposing evildoers? Are we that easily fooled by the con man? Or do we prefer to swallow the most convenient truths, even from our lovers, family, and cohorts? … Do my darling’s eyes betray that he’s a lying, cheating bastard? Is jolly cousin Molly plotting to edge us out of the will? Might glad-handing Bob at the office really be back-stabbing Bob? 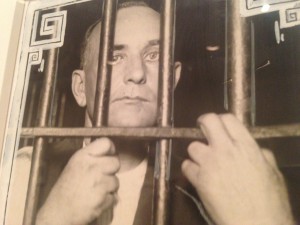 Working my way through the show, I became an amateur criminologist, analyzing the faces of these masters of guile. “The Reverend” Lawrence Hight’s unimpassioned stare from behind bars masked a venomous nature coiled to break free. 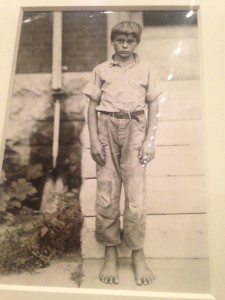 The benign demeanor of 12-year-old Freddie the farm boy who shot his two sisters in Wausau, Wisconsin, belied a calculating murderer.

Then there was Frank Smith (a likely name). Hauled back to Kansas State Prison on an illegal gun charge after moldering there for twenty-six years on a previous conviction, he’s reported as saying he was “glad to be back.” Compared to the deadly reality of life on the outside maybe incarceration had its perks. 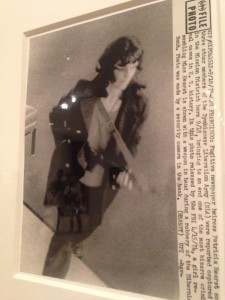 The exhibit may best demonstrate the allure of crime in the Femme Nikita photo of heiress Patty Hearst turned bank robber. Snatched from her gilded cage by the Symbionese Liberation Army in 1974, she was held hostage for nineteen months of capers before being rescued by the FBI. “Tania” then listed her occupation as “Urban Guerilla” and was sentenced to seven years in prison, commuted after twenty-one months by President Carter. Upon release, she tied the knot with her prison bodyguard and raised two children. Was the marriage a form of self-imposed house arrest to resist the exciting life of crime? 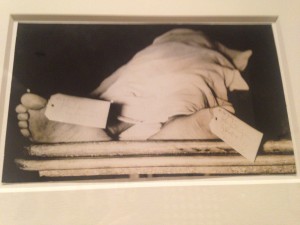 If the shoe fits …

Or does it inevitably end on a shelf at the morgue like John Dillinger’s sheeted body, his feet tagged as if at a sample sale. I wondered studying the soles of this notoriously dashing gangster, if a hunted-down corpse manifests a different postmortem persona than a body that dies a natural death. If I ever invite a coroner into The Male Harem, we’re in for some grisly pillow talk. 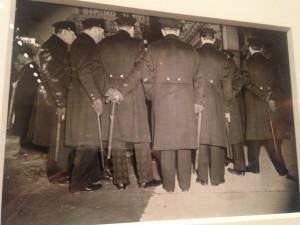 Still, the romance of the outlaw persists. Based on the show’s 1892 portrait of the Wild Bunch, you’d take these hotties over your milquetoast accountant any day after April 18. All dapper and dandy in bowler hats, they look more like investment bankers than bank robbers (though these days they’re one and the same). In comparison, a gaggle of cops from the 40’s, taken by crime photographer laureate, Weegee, look like Upper Eastside doormen with nightsticks.

It would be easy to relegate Crime Stories as an homage to film noir and head for dinner at Demarchelier on 86th(their coq au vin makes for good tax-time comfort food). The Valentine’s Day Massacre has become endearing folklore. Even the infamous electric chair at Sing Sing earned the charming moniker “Old Sparky” and was painted by Warhol.

But that might be denying ourselves another impulse.“Poring through the gore in the collection offered certain forbidden pleasures,“ writes Battaglia of the show’s curation. Whether artistic in intention or vernacular in nature, curator Doug Eklund tells him, the images ‘have a kind of energy and make you look’. 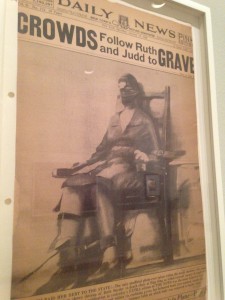 Maybe observing this parade of wrongdoers allows us to become voyeurs of our baser selves. These hard-boiled criminals stir up the dirty little secrets that we conceal with such immaculate pretense – those private transgressions that escape the scrutiny of judges or juries, spouses, friends, children, even the tax man. Yes villainous acts against society should be punished. But in freeing their calamitous spirits, are these daring outcasts more wildly sincere than our shamefully hidden selves?

To quote outlaw laureate, Oscar Wilde, “Sin is the only note of vivid colour that persists in the modern world.” These photos, in stark black-and-white attest to it.

Crime Stories: Photography and Foul Play is at the Metropolitan Museum of Art through July 31. Suggested admission is tax deductible.