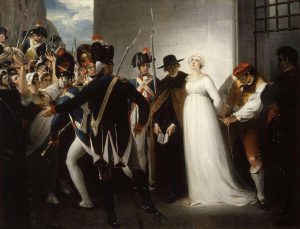 With the end of democracy just on the other side of holiday parties, it’s time for wardrobe planning. Never mind Ivanka’s festive collection of Billionaire Shabby Chic. Or Melania trending FLOOZY FLOTUS. I share with you now, fashion tips from the French countess who knew how to dress for them all.

First stop, the Albertine Library at the French Consulate on Fifth Avenue where The Sultanette has recently become a member. What more ideal venue pour moi than one offering French literary punditry, posh surroundings, and free wine! 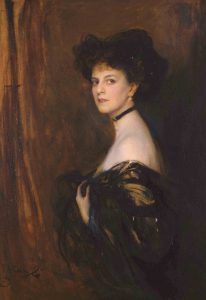 The vin blanc was flowing the Tuesday before Thanksgiving to toast Proust’s Muse, the Countess Greffulhe. Inspired by an exhibit now at the Museum at the Fashion Institute of Technology, Albertine had invited FIT director and curator, Valerie Steele, to discuss the countess’s haute persona with Proust expert, Anka Muhlstein.

From the moment Proust spotted the celebrated beauty at a garden party, according to Steele, it was le coup de foudre. Where hints of her can be found in several of his fictional characters, one conversation attributed to the countess is especially telling. Proust’s Duchesse de Guermantes sighs, “I shall know I have lost my beauty when people stop turning to stare at me.” To which her friend replies, “Never fear, my dear, as long as you dress the way you do, people will always turn and stare.” 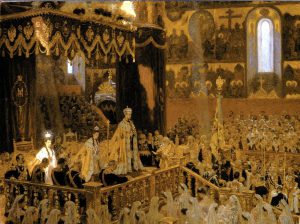 “Her fashions whether invented for her or by her,” the press reported, “must resemble no one else’s.” It was said that after a couturier presented his collection with fawning fanfare, she responded, “Make me anything you like as long as it’s not that.” When Tsar Nicholas II of Russia presented a court robe to her in 1896 she promptly recycled it into an evening coat.

But enough parlor talk! It was time to ditch the Consulate (not before quaffing un petit verre de vin)and head downtown for a look at the countess’s closet. 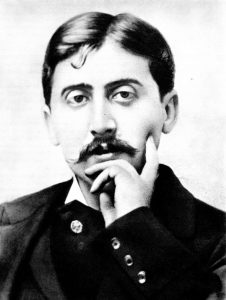 The stunning exhibit at FIT reveals the unapologetic vanity of a complex woman. This Proust muse, patron of Diaghilev’s Ballets Russes, investor in Marie Curie’s research on radioactivity, and champion of political causes, had one overriding passion: to be adored.

“I don’t know that there is any pleasure comparable in the world to that of a woman who feels that she is being looked at by everybody,” she observed. “How can one live when one can no longer provoke this great anonymous caress, after having known and tasted it.”

Yet an anonymous caress was more than Elisabeth could expect from her wealthy rake of a husband. The Count Henry Greffulhe was said to have philandered on their honeymoon. (Judging from a photo of him at the show, sporting bushy beard and pointy mustache, the count would have never qualified for The Male Harem.) 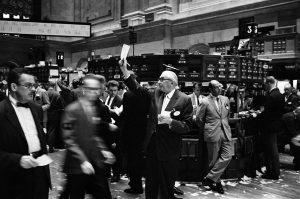 Where another woman might have retreated into the shadows, the countess stepped into the spotlight. Her allure was her currency and she negotiated it like a stockbroker’s portfolio. In a photograph circa 1887 she toys with the viewer – a woman in full possession of her powers, sweeping open the folds of a chinchilla evening coat to reveal her wasp waist framed in sumptuous lace. (While photography was verboten at the FIT an uninspired viewing can be found at http://bit.ly/proustsmuse.)

But the countess was not content to be a fashion icon frozen in time. A woman of true style, she embraced each new fashion twist, adapting it to her singular aesthetic.

A black lace bodice circa 1885, in glass jet pearls and silk tulle, is battle-ready for the corseted Victorian times when according to the show’s description, “women were armed with fans as men with swords, and sometimes did more damage with them.”

When flappers liberated fashion in the twenties, her look went liquid. A 1925 chemise shimmers in a sea of pink and turquoise sequins under an ethereal layer of bronze netting. The minimalist chic of a black velvet gown – all sleek silhouette from tiny bodice to graceful floor-length folds – captures the elegant glamour of the Thirties. 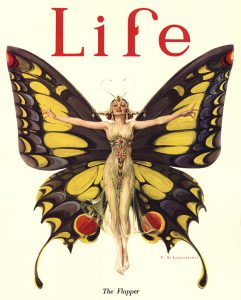 In 1945 when the shortage of heating during the Occupation obliged the countess to live in the servants’ quarters, she fashioned a hat from paper, cellophane, and straw, with an impish tail of woven satin ribbon – the chapeau as dragonfly.

Does style preclude substance? Can artifice tease out authenticity? What did the countess have to say for herself? 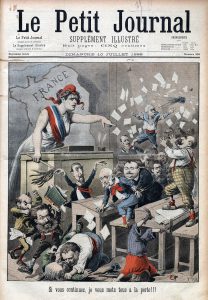 In 1894, when an artillery officer of Alsatian and Jewish descent was convicted of treason, the Dreyfus Affair exposed anti-Semitism and ignited a freewheeling press. Emile Zola’s famous “J’accuse …” a 4500-word open letter on the front page of L’Aurore went viral, increasing the paper’s circulation from 30,000 to 300,000, the day it was published.

The Countess Greffulhe declared herself a dreyfusard. “We should have the courage of our convictions,” she said. “It is a luxury, the most important one of all.” If you’re wondering what to wear for the end of democracy, that fashion tip from the countess might be her smartest.